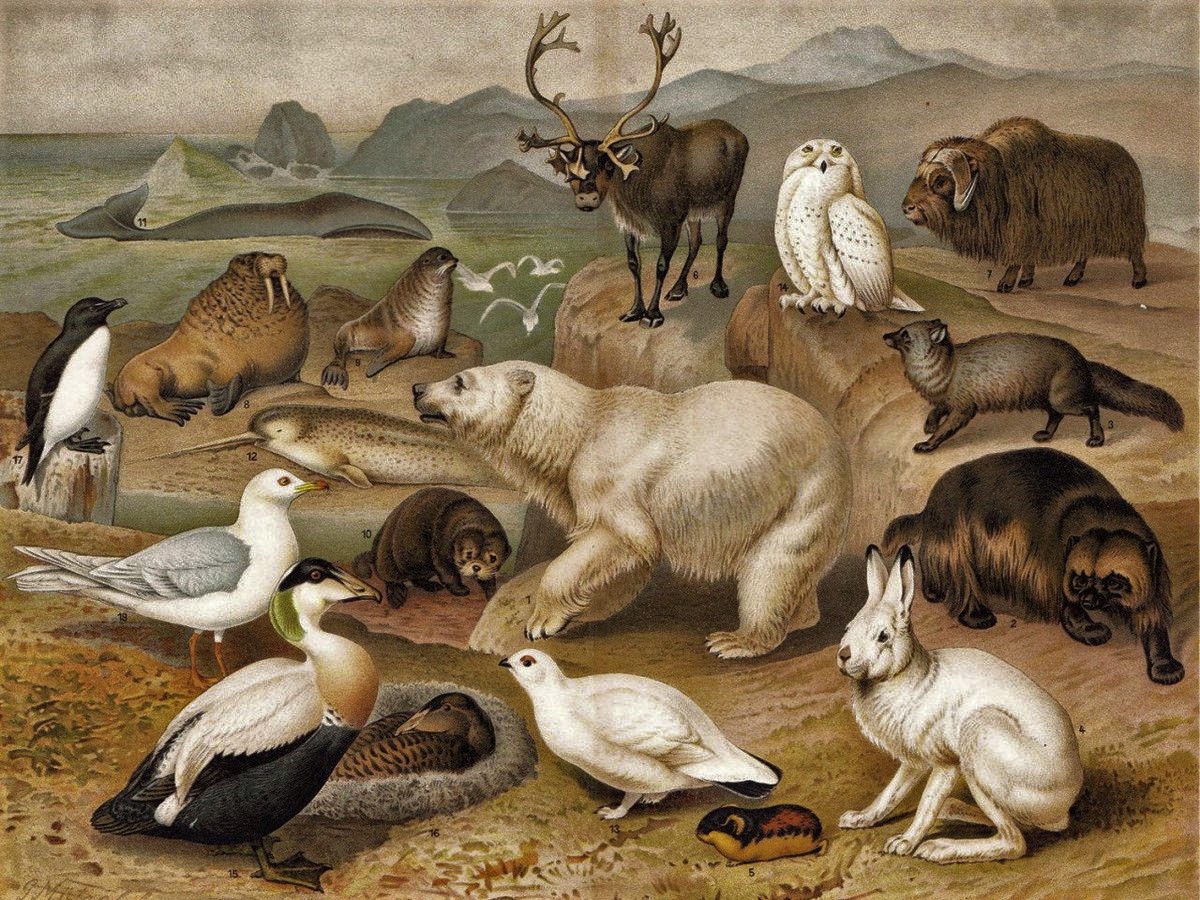 In the World Around Us

A lesser known aspect of predators is that they protect species lower in the food chain, and allow ecological niches to exist that provide habitats for species that would otherwise not be able to live in the area.

No one can "command" a bird to flock in a certain direction, because the travel pattern of the flock emerges from its own movement. - The Living Company

Tolerance of internal weakness, ironically enough, allows the rose to be stronger in the long run. - Ibid

The Snowshoe Hare is a "keystone" species. ... There is a well-established cycle of boom and bust for snowshoe hares which occurs on an average of 10 years (and which may be related to sun spots and rainy periods). The hare peaks are followed by an inevitable crash directly affect the numbers of animals, particularly lynx, dependent on them as an important food source. Hares overeat their environment, particularly willows, which then respond to over-browsing by producing a chemical defense to repel the hares, thus inducing starvation and their cycle spirals downward. This is soon followed by decreased number of lynx, red fox, wolverine and birds of prey. - Kantishna Wilderness Trails

When hunting wiped out the sea otter from the B.C. coast, the kelp forests disappeared from many areas. By limiting the number of sea urchins, the sea otter promotes the development of kelp forests which in turn provide habitat for fish and invertebrate species. - Biological Principles

In the Rift Valley in Kenya, there is an 'Eden'-like protected area known as the Maasai Mara, which teems with thousands of wildebeest, zebra, hyena, buffalo, impala, gazelle, giraffe, lion, and rhino. Elephants come here to age past their last set of teeth and die of malnutrition. Animal species are also becoming unhealthy due to lack of natural selection and inbreeding.

[Chilean peasant farmers, who practice a "lazy" type of potato farming that could be improved 15 percent by more systematic weeding and cropping of a smaller variety of types which are higher-yielding] are not locked into a particular set of farming practices, or a particular type of potato; they may be inefficient at times, but they have diversity bred into their everyday practice, diversity that allows them to meet unforeseen disaster. - The Living Company

B.C. has few endemic species due to it being a relatively new landscape due to glaciation that used to cover most of it.

Since 1900, the Sahara has expanded by 250 km to the south, covering an additional area of 6000 square kilometers. Desertification in the Sahel can affect more than one billion of its inhabitants. 70% of the arid area has deteriorated and water resources have disappeared, leading to soil degradation. The loss of topsoil means that plants cannot take root firmly and can be uprooted by torrential water or strong winds. - UN on Desertification

Currently, the Gobi desert is the fastest moving desert on Earth; according to some researchers, the Gobi Desert swallows up over 1,300 square miles of land annually. This has destroyed many villages in its path. Currently, photos show that the Gobi Desert has expanded to the point the entire nation of Croatia could fit inside its area. This is causing a major problem for the people of China. They will soon have to deal with the desert as it creeps closer. Although the Gobi Desert itself is still a distance away from Beijing, reports from field studies state there are large sand dunes forming only 70 km (43 m) outside the city. - NY Times' "Living in China's Expanding Deserts

Variables that do not corrolate with longer life spans for the poor: religion, environment, and health insurance. A variable that does matter: How many rich people live in a city. More rich people in a city means the poor there live longer. [Reason for this not worked out yet] - Seth Stephens-Davidowitz, "Everybody Lies," citing Chetty et al.

The real reason that the Europeans did not go inland and seize the Gold Mines of West Africa or Southern Rhodesia, for example, was that the Africans there were already well enough organized to exploit these resources themselves and to keep the overland trade in their own hands. It was in large measure the progress already made by the Africans in earlier centuries that enabled them to resist the modern age for so long. - A Short History of Africa, by Oliver and Fage

The flocking [at business training meetings] is intensive; course attendees nearly always tell you afterwards, "It was not so much what I learned in the official sessions, but what I picked up from my colleagues during the breaks that was important." - The Living Company

Most innovative companies are run by teams. This is because teams have a higher capacity to learn than individuals. - Ibid

Every company we found that had been in existence for 100 years or more had gone through a period of adaptation so profound that it had had to thoroughly alter its core business portfolio. Some had made this change several times. ... (An example: Booker McConnell, the "Guyanese company," it's first business was sugar production in South America. It then began spreading its investments under an outward-oriented management, in anticipation of the nationalization of its original core business. It moved into shopkeeping and shipping, as well as into publishing (through an "Authors Division"). Its annual Booker prize for literature is famous, although Booker McConnell's corporate identity remains largely unknown.) - Ibid

[These companies] found it easier to adapt because they had tolerance. Tolerance was the core quality that made it possible to diversify and decentralize, yet still manage the entity as a whole. These companies were particularly tolerant of activities in the margin: small, seemingly strange businesses that might have been pruned off the corporate rosebush elsewhere, but here were given enough resources to straggle along until the corporation needed them as an outlet for endeavor. - Ibid

Under monopoly conditions, a stable market or other conditions in which the company maintains control, the managers will do well to optimize efficiency. - Ibid

[The art of management] consists of the daily activity of steering the institution in a direction that will ensure that it, and the entities within it, move toward their full development. - Ibid

The health of a company is under constant attack from the inside and the outside. The attacks come from individuals or groups of individuals who do not want to be part of the whole. They are for their own purposes. It does not matter how honorable or dishonorable these purposes may be. The health of the community is under threat. - Ibid

Openness inevitably means that something other than oneself enters one's body. - Ibid

[When a large company buys a smaller] The tribes within the merged institution continue to see themselves as separate entities. If I come to your country as part of the merger of our companies, you will still see me as an outsider. You will trust me less than someone from your home institution. On the next promotion you make, you will seek out someone from your own bank; and on my part, I will attribute my failure to get the job to the fact that you are a member of the other tribe. Thus we will trust each other even less as time goes on. ... Shell [the buyer] did not show a rejection mechanism. But Billiton did. The Billiton entity ailed and, in effect, died. Less than a decade later, nearly all of the senior Billiton managers had left--notwithstanding the utmost care Shell had exerted to leave the original Billiton management in control. We had tried to prevent Shell managers from overpowering the new family member, but the ecological relationship between the two companies made that impossible.- Ibid

Every intruder has a choice: it can select a symbiotic relationship or it can pursue its own benefit, to the exclusion of all others. ... The parasite plans its exit on its own terms. Any other intruder exits through the host's natural functions and systems, such as excretion and procreation. A parasite breaks through the host's natural functions, exiting in a way that may destroy or harm the host. ... The primary difference between members and parasites, then, will have to do with their method of exit. Members will retire, whereas parasites will serve for their own sweet time and leave by a different route. - Ibid

When new members enter the system, make sure that there is a contract based on long-term harmonization of goals. - Ibid

[Money] is the means by which the company gets access to resources--by which it remunerates its people and its shareholders. - Ibid

People experience a dramatic decline in cravings for sweet foods when they eat breakfast. However, breakfasts that are high in protein also reduced cravings for savory - or high-fat - foods. On the other hand, if breakfast is skipped, these cravings continue to rise throughout the day. - Prof. Heather Leidy

Dopamine levels are blunted in individuals who are overweight or obese, which means that it takes much more stimulation - or food - to elicit feelings of reward; we saw similar responses within breakfast-skippers. To counteract the tendencies to overeat and to prevent weight gain that occurs as a result of overeating, we tried to identify dietary behaviors that provide these feelings of reward while reducing cravings for high-fat foods. Eating breakfast, particularly a breakfast high in protein, seems to do that. - ibid

When the Way rules the world, Coach horses fertilize fields; When the Way does not rule, War horses breed in the parks. - Lao Tzu

Of lemmings and snowshoe hares: The ecology of northern Canada The Snowshoe Hare The Living Company (book), "Ecology" section, by Arie de Geus

This article can be discussed on r/TTTThis.